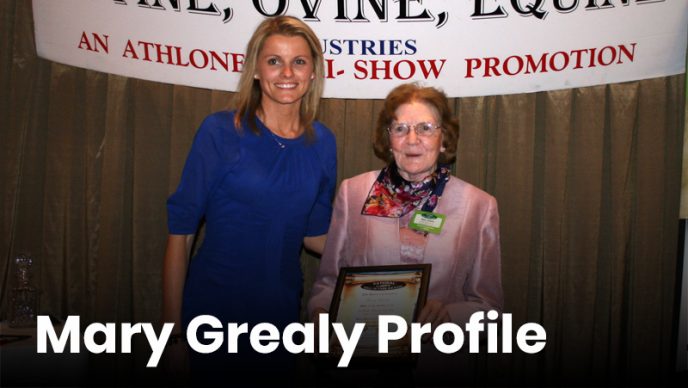 Mary Grealy has been breeding sheep since 1954 and was the proud owner of one of the first Suffolk Flocks in the West of Ireland in the early 60’s.  In 1971 the West of Ireland Purebred Registered Suffolk Sheep Breeders Club was formed following a very successful show & sale of Suffolk Sheep at Roscommon Mart.; Mary became a member the following year in 1972. Mary was instrumental in arranging the first Sale of Suffolk Sheep at Athenry Mart in 1979; this sale has continued annually and the Club will hold its 41st Sale there next Monday 24th August at 1.00pm.  Always being an active club member from the start, Mary was elected chairperson of the club in 1979 and continued in this role until she stepped down and took over the position of Club Treasurer.   In 1998 she was bestowed with the honour of President of the Club, she still holds this position at the present time and thoroughly enjoys it. The West of Ireland Purebred Registered Club arranged that Mary would be honoured with the National Hall of Fame Awards in 2013.  Over the years her flock, “The Oranmore Flock” has exhibited at every show and sale held by the West of Ireland Suffolk Sheep Breeders Club and has won many championships.

Mary believes that it is important to produce sheep that stand the test of time, sheep naturally fed and presented in their natural state.  The market always dictates what the purchasers wants; and she has seen that the day for the big head and big legs is no longer an attraction for the buyer. Today’s customer requires a good carcass sheep with moderate bone and head for easier lambing.  When the purchaser is satisfied with his purchase he will return to the sales and continue to purchase quality sheep. The Suffolk Cross Ewe has always been recognised as a top class mother and will cross with any other breed to produce a lamb for every specification required by todays discerning customers. Mary says that the Suffolk is structurally sound, with excellent feet and a prolific milker, highly resistant to mastitis and long lasting.

Mary recognises that the Suffolk Breed is without exception the most versatile breed available to today’s sheep farmer. As a terminal sire the Suffolk is unequalled in terms of growth rate and fleshing ability. The unrivalled ability to finish off grass has resulted in unprecedented demand for Suffolk Rams this year as many farmers realise that with current concentrate prices rocketing, using some of the other ‘leaner breeds’ is no longer viable. This has led to our catch phrase; ‘buy a Suffolk ram and sell your creep feeder’.

Mary is now looking forward to celebrating the 50th anniversary of the West of Ireland Suffolk Sheep Breeders Club next year with many of the members of the original Committee and breeders; whilst sadly, a number of these fine breeders have now gone to their eternal reward in many cases their family members have continued in the tradition of their forefathers to continue to promote the Suffolk breed.

Update from the Chairman 2020