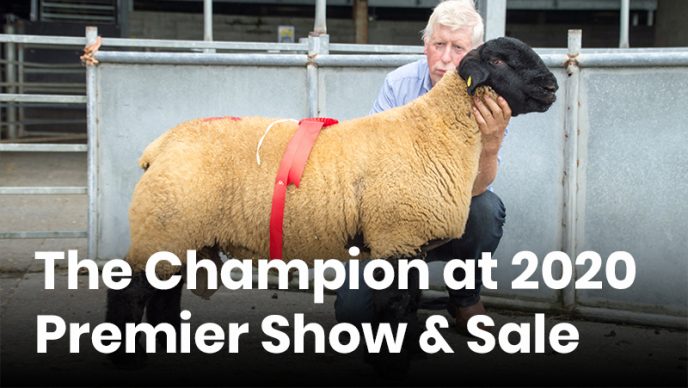 Moatfarrell flock est. in 1949 by Denis Lynch is now one of the oldest Suffolk flocks in Ireland. We have always endeavoured to use the best pedigree rams either through import or Irish bred. The flock has had tremendous success at shows and sales over the years, producing premier sale champions and reserve champions. The Flock holds the record at having won the group of three class for nine consecutive years at the premier show and sale. Member of the British Suffolk Society 1949-2019.

All revenue generated via membership etc. can now be directed towards the promotion of Irish Suffolk Sheep.

The Moatfarrell Flock is proud to be a member of this new stand alone Irish directed society. We believe that this change of direction and emphasis in the breeding of Suffolk Sheep is the proper one. Indeed this was reflected in the success of our second premier sale that was held in Roscrea mart on Saturday last August 1st.

We are proud to have produced the Sale Champion who was purchased for €1500 by the judge Mr. Stephen Govin for his flock at Mayo Abbey Claremorris, Co. Mayo. This was the first lamb shown by the main flock stock ram Burnview Magic. Burnview Magic was sired by Forkins Ferrari II. His dam is Willy Tait’s great breeding ewe T86 13082. Who has bred numerous high price selling rams. She is the dam of Burnview Hitman II one of the top rams in the Suffolk world.